Chess is a game that is played my many people. The game has different pieces, which are Pawns, Rooks, Knights, Kings, and Queens. The pieces are white and black, or at least, a brighter color and a darker color.

The most popular theory of the origin of chess happened 1,000 years ago, when a king ordered his generals to create a game that would help defend themselves. One of the generals created chess, which is played by thousands of people today.

The Pawn is the weakest piece on the chessboard. It can be moved one square ahead and diagonally only for capturing.

Rooks are powerful pieces that move up and down or side to side. They are found at the corners of the board.

Knights are special because they are the only piece that turns on it's moves. It makes in "L Shape" on the board.

Bishops move diagonally only and can never leave those colors.

The King can move in any direction, but only one square at a time. If a King is captured, game over.

The queen is the most powerful piece on the board and can move like a rook or bishop.

How to Play Chess

Looking at the board from one side (with the bottom right corner white), arrange the pieces this way:

1.) At the second row from the edge of the board, put all the pawns on all 8 squares.

2.) At eack corner of the board put the rook on the square

3.) With all the pawns and rooks on, put the rest of the pieces in between

4.) At your rook on your left and right, put the Knight on the square that's closer to the middle of the edge of the board.

5.) Doing the same thing, put the bishops on

6.) You should have two squares empty on each side. Put the King on the left square and the Queen on the right.

Here is a list of how the pieces move:

Pawn: Can move forward one square but can only capture diagonally.

Knight: Can move in any direction but only in "L Shapes"

Rook: Up and down, Side to side

King: Any direction, but one square at a time.

When the game starts, white usually goes first. The players try to get the king out using their pieces in the directions listed above.

If the king is in a position that can be captured, the opponent has to say that he/she has to move their piece. If the King cannot move anywhere else, game over!

The highest title a person can attain is World Champion. About a dozen people have held it before. Here is a list of people who did:

Grandmaster is the second highest title a person can attain. Once you win it, you keep it

Other titles include International Master and FIDE Master. 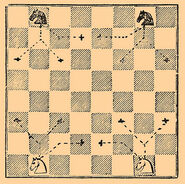 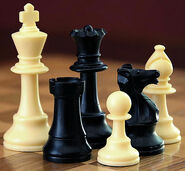 A Bishop, in front of the Knight and Queen

Chess set up
Add a photo to this gallery

Retrieved from "https://the-chess.fandom.com/wiki/Chess_(game)?oldid=4135"
Community content is available under CC-BY-SA unless otherwise noted.